I once sat next to a man on a plane, who told me his management style was based on the saying, “How do you eat an elephant?  One bite at a time.”  I never really understood that saying. But when the moving truck(s) pulled up last Thursday,  I got it. 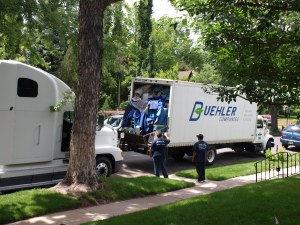 What you can’t tell from the picture is that there are two trucks – and the truck nose is leading a semi. The little truck was from the condo and the semi was the truck of all things from storage. Really? I could have sworn we gave more stuff away.

(On the subject of getting rid of stuff, a quick digression: A few weeks ago we were having dinner at a pizza parlor in another part of town and the waiter looked so familiar. After a few trips to our table, we all commented on how we might know each other and it turned out he was one of the “College Hunks Who Haul Junk” who came to the old house 3x to haul away stuff! That’s how much stuff I could have sworn we got rid of.)

But alas, it took 13 hours to move everything into our new house. And as I watched the guys carry in box after box, I wondered how I would ever make this house a home. I started to get that pain in my chest and the voice in my head screamed, “Why did you move?” But then, another voice, a voice that had moved numerous times in my life, chimed in and whispered, “One box at a time…”. And so, I set about focusing on one box a time and a funny thing happened; by Saturday night – there were no more boxes in the main rooms of the house – kitchen, family room, living room and bedrooms.

The smartest thing I did was hire Danny, the handyman, to come by every morning for a few days and take away the empty boxes as I unpacked them. Something about removing the clutter gave me the space to relax.

And now, on July 4th, while there are still pics to be hung, rugs to buy and window treatments to coordinate, there is still much to celebrate. Friends are starting to drop by and with their laughter, are helping turn our house into a home.

How can you apply MindFULLY apply the “One Box At A Time” theory in your life? Let us know!